The aircraft
Built by Fokker in the Netherlands, construction on c/n 683D-8161/company model 683-04-10 was started in 1963. The aircraft performed its first flight later that year as KG+261 on the 9th of October 1963 flying from Schiphol to Avio Diepen where it received modifications to complete its construction as an RF-104G. It received a ‘norm 62’ camouflage scheme before being sent over to Ingolstadt-Manching airbase on the 17th of March 1964 where it was accepted by Aufklärungsgeschwader 51 „Immelmann“ (51st Reconnaissance Wing). Here it served until 1969 when AG51 relocated from Ingolstadt-Manching to Bremgarten. Here it received its official ID serial 24+19.

In September the following year, the aircraft flew to Leck AB where it was handed over to Aufklärungsgeschwader 52 and modified into a fighter-bomber version (F-104G) by July 1971. It then moved about a couple of times more, operating at various airbase and squadrons like JaboG 36 in 1971, JaboG 33 in January 1975 and by November that same year with JaboG 34 at Memmingen AB, where it received more upgrades like a flight-data and LEADS 200 crash recorder. By 1984 the aircraft was set to be struck off charge by april.

What almost ended in an airframe leading a relatively remarkable service life was suddenly changed in May 1984, when the aircraft was painted in the colours of the German flag and a huge squadron emblem on the tail. Though the aircraft officially carried the serial ID 19+24, it was adorned as 25+50 in commemoration of the 25th anniversary of JaboG 34 and the 50th anniversary of the Memmingen air base.

The aircraft was retired that same month and was struck off charge by the 11th of April 1984. While it didn’t change anything about the retirement of the aircraft, it might have saved it from a scrapheap serving as an eyecatching instructional airframe at the base. As such it received its training aid code C017 and was returned to its original serial 24+19, although this time as instructional airframe. This is also why pictures show different markings, they are the same aircraft, but it only flew wearing the 25+50 serial. The aircraft was later preserved at the Deutsch-Kanadisches Lw-Museum at Baden-Airpark (Baden-Sollingen) in special markings.

The Starfighter with the Luftwaffe and Jabog 34.
The service life of the F-104G is an infamous story. Providing a modern, high-speed, high-altitude interceptor to complete ground strike missions with a recently reformed air force with pilots and ground crews rushed through training on jets unable to even break the sound barrier spelled doom from the start. Even Erich Hartman, commanding one of the first post-war jet fighter squadrons, considered the aircraft unsafe and unfit for use with the Luftwaffe even before its introduction

Despite the aforementioned high loss of life and aircraft, the Starfighter served in operations with the Luftwaffe for 27 years from July 1960 until October 1987, continuing its use as a testbed until May 1991. Of the 916 aircraft delivered, 292 crashed claiming the lives of 115 pilots, US instructors and even a ground crew flying as a passenger. 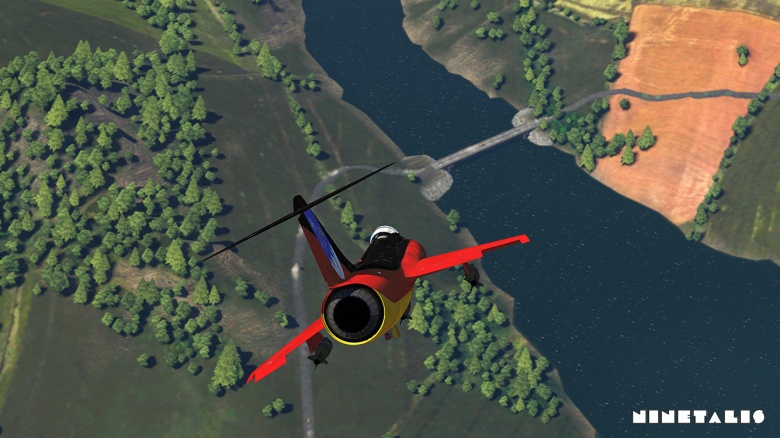 Throughout the years the (West German) Luftwaffe Starfighters operated in many squadrons. One these was the Jagdbombergeschwader 34 (Fighter-bomber squadron 34), which operated the type from 1964 onward, replacing the squadrons F-84F. Noteworthy is that two F-84F of the squadron had crashed in Czechoslovakia only 5 years prior, which led to a diplomatic row between the two countries which… actually didn’t have any official diplomatic ties.

Despite this incident, the squadron actually proved it’s level of professionalism in operating the F-104, as its Starfighter losses where less than that of other squadrons, receiving several awards for accident-free flying and outstanding performance. During these years the squadron also changed its emblem several times, initially made up from a green heart in a white shield with a red border, to a blue shield carrying a white edelweiss in a throwback to the emblem of KG.51 operating in WW2. This later changed again to a NATO association badge, where two stylized aircraft are flying over snow-capped Alps which surround the airbase of Memmingerberg from which it operated. The white and blue color palette was chosen in reference of the Free state of Bavaria in which the association was stationed.

On the 23rd of October 1987, the Starfighter was retired from Jagob 34 and replaced by the Panavia Tornado, completing a total of 242,785 flight hours on the former type. Although the type was no longer in use, it still got some recognition of its achievements as the squadron was awarded with a banner of the Free State of Bavaria in 1988 for the squadron’s services over the years. Here it received it nickname “”Allgäu”‘. But by the year 2000 the squadron was chosen to be decommissioned in an effort of restructuring, officially suspending flight operations by the end of 2002 and the final decommission taking place on June 30th, 2003. The following year the air base was disbanded and turned into a regional civilian airport. 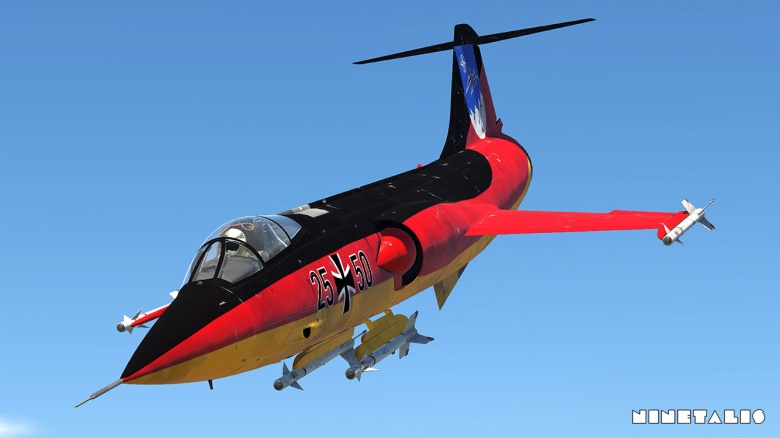 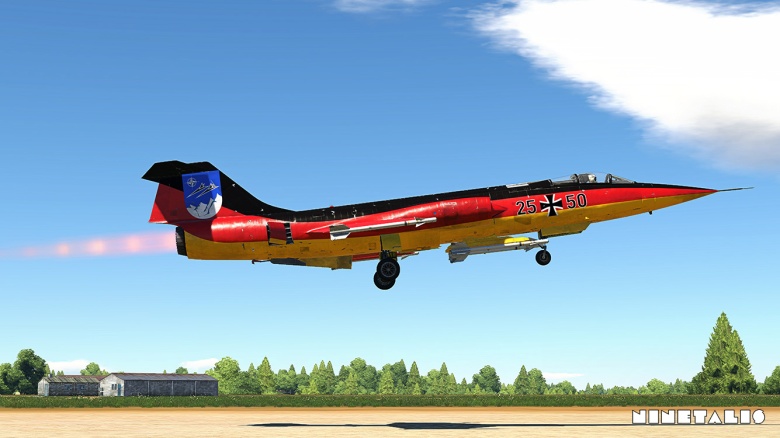