The subject
The Saab 32 Lansen was a two-seat, transonic military aircraft designed and manufactured from 1955 to 1960 for the Swedish Air Force. It was designed to replace the conventional designs like the B 18/S 18, J 21R/A 21R and J 30 aircraft. The requirements laid out by the Swedish Air Force for its new aircraft were the ability to attack anywhere along Sweden’s 2 ,000  km (1 ,245 miles) of coastline within one hour of launch from a central location. It also had to be capable of being launched in any weather conditions at any time of the day in Sweden’s harsh climate.

The Lansen variants completed three mayor roles which were attack (A 32A), fighter (J 32B), and reconnaissance (S 32C) duties. The aircraft was infamous for crashing, as a third of all 450 Lansens produced were destroyed during it’s 25 years of active service. The accidents were due to a combination of technical faults, the aircraft not being ready for service and training deficiencies in regards to flying at night and in adverse weather. Formally, the aircraft served with the swedish airforce until 1997 as target tugs and electronic warfare platform. Nonetheless, by 2012 a total of three Lansens reportedly remained in active service for research purposes with the Swedish Radiation Safety Authority.

partially based on information provided at WIKIPEDIA, 3RD march 2015. 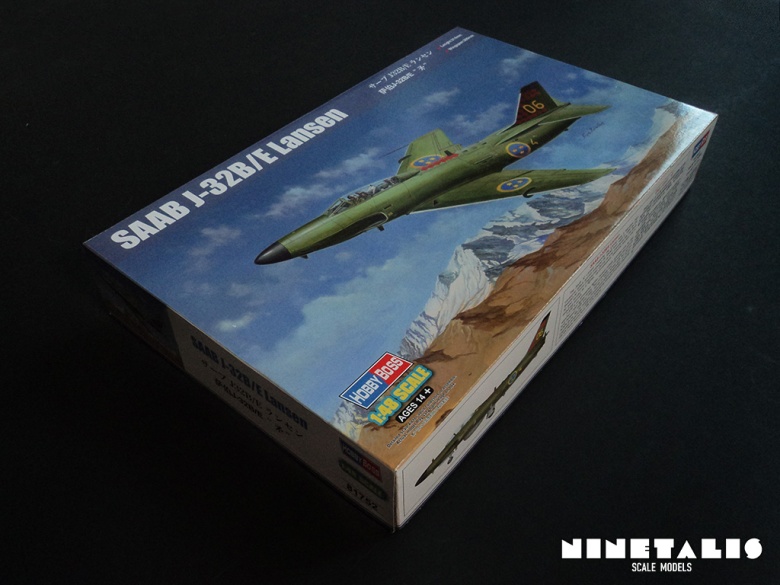 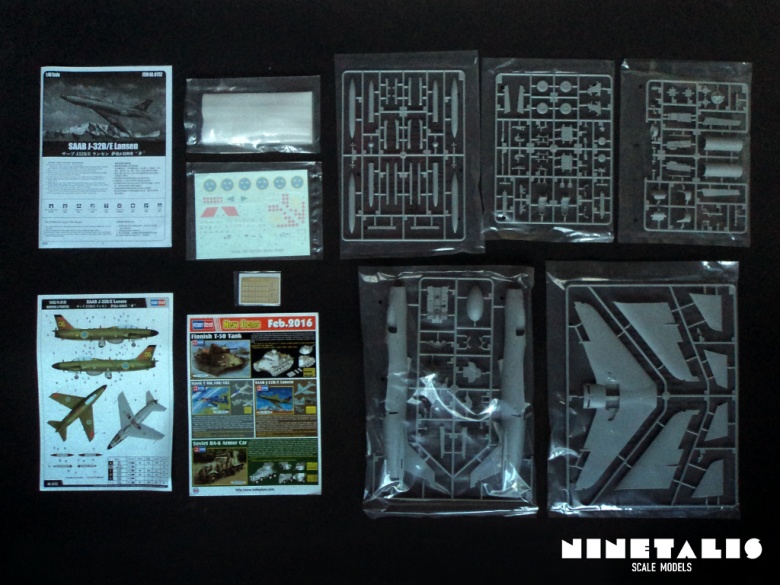 The contents
Upon opening the kit, we are greeted by six frames, five in styrene and one clear sprue. These frames are all rather large because, If you are not familiar with the subject, the Lansen is a rather big aircraft. One of the frames just holds underwing weaponry storage units and drop tanks which one can choose to use or not. Details on the parts are sharp as we are used from other Hobby Boss kits and come in the form of recessed panel lines. 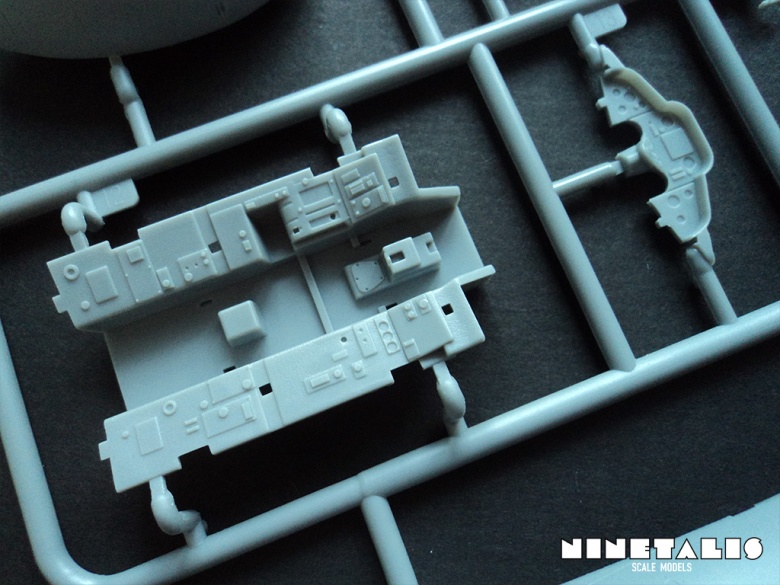 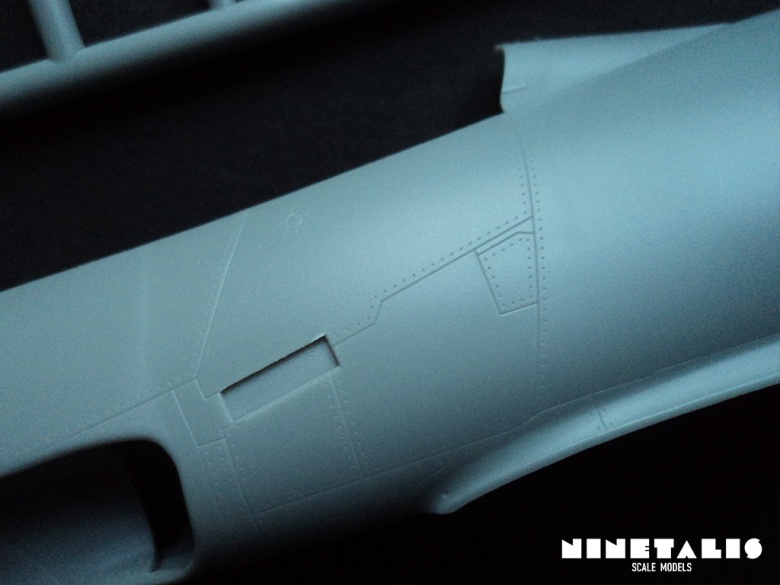 The A sprue
Our first frame holds the two (large) fuselage halves, nose cone, blister fairing, and most of the cockpit parts. As said before, the fuselage parts are well detailed with recessed panel lines and recessed rivets. The cockpit parts are also well detailed and the better modeller will be able to make it stand out without the help of photo-etch parts, the only part in here that could have been a bit better for me is the instrument panel itself, but it is not that you can’t work with it, much to the contrary actually. 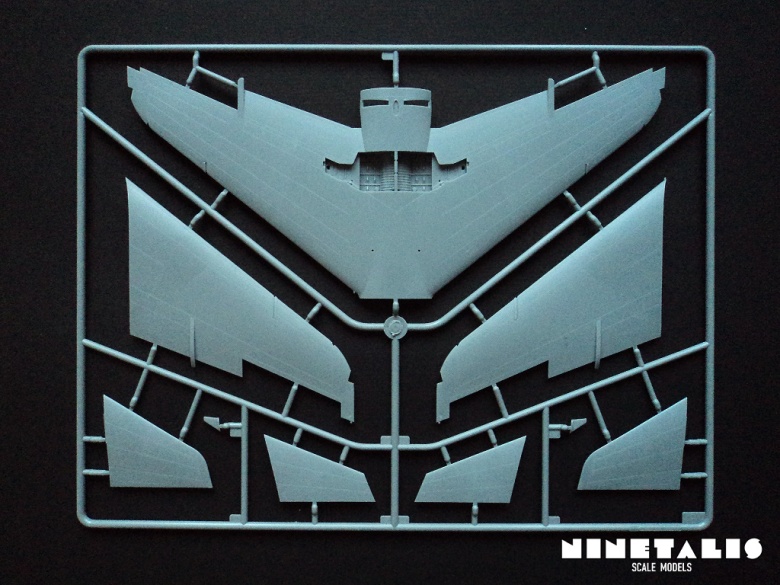 The B sprue
The B sprue holds the other large parts of the fuselage, aka the upper and lower wing halves, as well as the horizontal stabilisers, with the central wheel wells molded into the lower wing half. Again we are greeted by recessed panel lines and recessed rivets on all these parts, making for very realistic looking parts.

The C sprue
On our third sprue we can find the engine’s exhaust parts, the inner intake parts, the main wheel well parts, the landing gear and the ailerons. Most of the parts are up to the high detail standard that can be find throughout the kit, but the ‘engine’ part that goes at the end of the exhaust is very basic looking (even though it will be well hidden once build).

My real problem on this sprue however is that of the intake parts, which is so short that it will be clearly obvious once build. It is a little sad that Hobby Boss did not decide to reproduce the intake a little bit more so we could look a little bit into it and it wouldn’t be as obviously closed off as it will be now.

The D sprue
The D sprue is the last styrene sprue holding aircraft parts that one ‘has’ to use. Most notably are the wheels, wheel well covers, ejections seats, the rudder and all other kinds of smaller parts. There isn’t much to note here, but a very interesting being are the larger landing wheels.

This is because one side of the rims are ’empty’, where the rim is a separate part on the C sprue which you attach directly to the landing gear. One can just hope that this way the landing gear will be strong enough to support this large aircraft, as the attached point between these parts seems a little bit to small to support it. The future will have to show wether or not it will be strong enough to deal with the weight.

The E sprue
The last styrene sprue holds the hard points and the external storage tanks and missiles for the Lansen. As mentioned before, the usage of these parts is optional and can be skipped if one would like. Although it was hard for me to find out what exactly we are provided with, I found we have two BOZ 3 chaff dispensers and I assume we also have two 159US Gallon fuel tanks, a type of missile and something I absolutely could not find out what it is.

(If someone knows what these external weapons are, please send me a message and I will gladly adjust this)

The clear sprue
The clear sprue on this kit is carefully packaged and bagged separately, which holds eleven parts, three of these parts form the canopy. One these parts goes on the inside of the canopy, dividing the navigator and the pilot from one another in the cockpit. Other parts are navigational and landing lights. 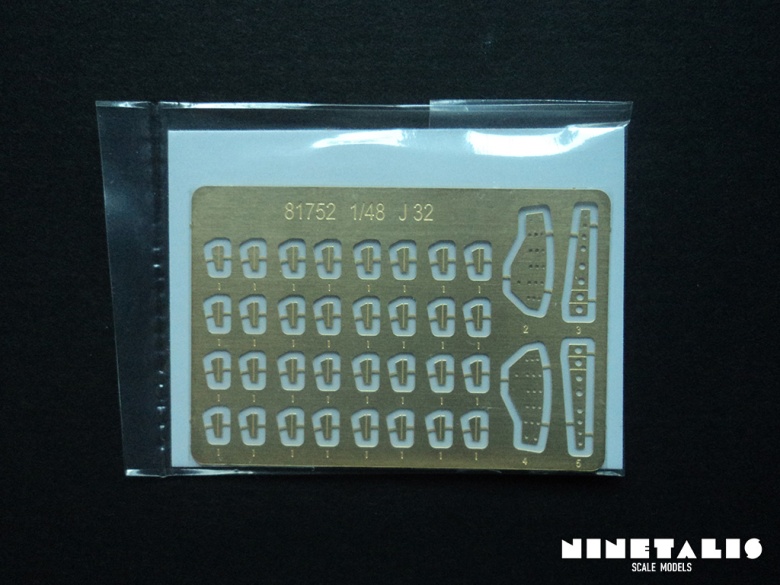 Photo-etch
As is sometimes the thing with Hobby Boss kits, we occasionally get a photo-etch fret with our kits. This new Lansen kit is thankfully one of those. It provides us with some parts for BOZ 3 chaff dispensers while the other parts are for the airbrakes to give it a little bit more detail.

The printed material
The kit provides an instruction sheet, a color-printed marking and painting chart, decal sheet and leaflet with the newest releases for February 2016, which includes our own Saab J-32B/E Lansen.

The Instructions
The instructions sheet is printed in black and white, illustrated with computer generated illustrations dividing the construction into 21 different steps. Most of these steps feature smaller substeps. When quickly looking at the illustrations, it seems that most of the steps should not provide too much trouble to understand and are quite clear.

The markings
Markings-wise we are only provided with the choice for one aircraft, which is the 32606 airframe. A little bit of surfing on the internet raises a few questions, as the airframe is often brought forward as a J-32D, which is a target tug version. Our kit states to provide the B and E version, but not the D. The confusion might be explained by the fact that 6 J 32B’s were modified into the D version, who were retired in 1997. Either way, the parts in the kit should do to create a D version, since the airframe is almost exactly the same.

PHOTOGRAPH shared by Teijo Hakala with A CC BY-SA 2.0 LICENSE

Then there is also the issue of the bottom painting scheme. The kit states that the aircraft has green upper surfaces and grey lower surfaces, which is how probably 90% of the J-32’s were painted. However, aircraft 32606 is different since only the aft part of the lower airframe is painted grey as we can see on this picture, and not completely as stated by the kit. Also notable are the hard points, which are also not show on the kit’s paint scheme. Even after a simple Google search, the older pictures of this aircraft show the exact same paint scheme and setup so it is odd that this was not noticed, especially the 06 on the wheel well cover. Luckily for us, knowing this it also means we can fix this problem with the necessary actions. 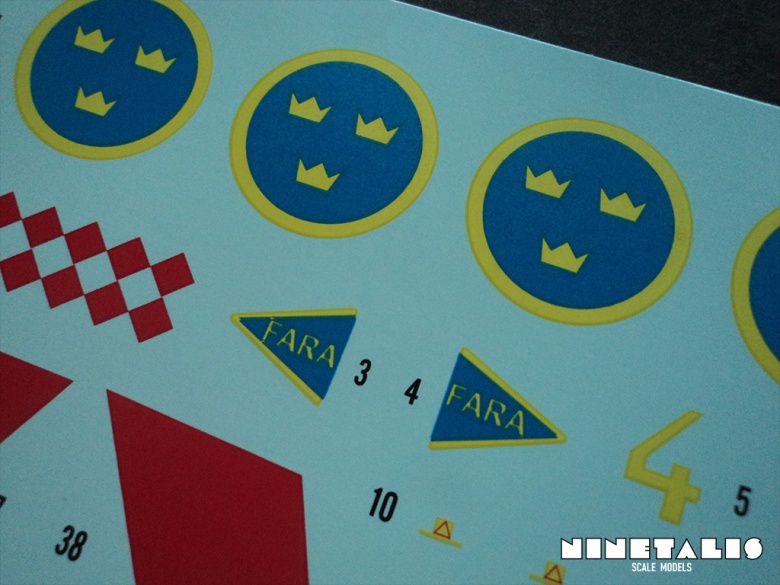 The decals
As we only have one airframe provided in the kit, there naturally aren’t many decals provided. While we do get warning signs and various stencils, they fall apart with the insignias and the intake warning. Or the designer or the printer did not take in account the overflow of the blue ink over the yellow, which sadly shows on the decals. Luckily, the one decal where it stands out the most, is according to photographic evidence, not needed. The serious modeller will probably want to address this if he or she plans to build a different aircraft, but other than that however, the decals should do fine for most of us.

The conclusion
What we received from Hobby Boss is a pretty straight forward kit of the Saab J-32 Lansen fighter variant. Making the comparison with the Tarangus kit is inevitable, of which I will say I prefer the Hobby Boss over that other one. For one, it is cheaper, the detail seems a little bit better and don’t take my word for it, but I can fairly certain say that this one will be easier to build too.

Does that mean this kit is perfect? No, even though it is cheaper that the competition, it is still 45-55 euro for a straight forward kit. The intake isn’t designed all the way through, I have my questions of the strength the landing gear will provide and the decals could have been better and sadly we only get one set of markings. The biggest screw up with the whole kit was sadly the painting scheme, which is correct for the most part, but completely wrong on the bottom surfaces. But, this is easily fixable with a new set of decals or a good well prepped masking job.

But after all is said and done I would dare to say this is the better Lansen kit that is on the market at the moment, especially when you want one in 1/48. This is mainly considering the price and build ability. Accuracy though I would dare to give to that other 1/48 kit. Even with the things mentioned above I’d still recommend it for any scale modeller. Both beginner and more experienced should have some fun with it, although the latter will want an after market decal sheet.