The subject
The Kawasaki Ki-61 Hien (飛燕, “flying swallow”) was a Japanese Army aircraft designated as “Army Type 3 Fighter”. Initialy it was often mistaken by Allied pilots as a Messerschmitt Bf 109 or an Italian aircraft. This was most likely due to being the only mass-produced Japanese fighter of the war to use a liquid-cooled engine. Ironically enough, the aircraft did use a Kawasaki build licensed DB 601 (the same power plant used with the Bf-109), known as the Ha-40.

The Ki-61 was to be a light general-purpose fighter, intended to be used in offensive air superiority roles at low to medium altitudes. While seeing extensive service in China and Southeast Asia, the aircraft is probably most known for intercepting American Boeing B-29 Superfortresses over China and the Japanese homeland Islands. The tactic of using the aircraft to ram the enemy was not an uncommon practise during these operations. These attacks were executed to such an extent that ‘Special Attack Units’ were formed, which even included 244th Hiko Sentai (Fighter group). Even if the pilot survived such an attack, they remained obliged to continue these deadly and dangerous ramming tactics until they were killed or no longer able to fly. 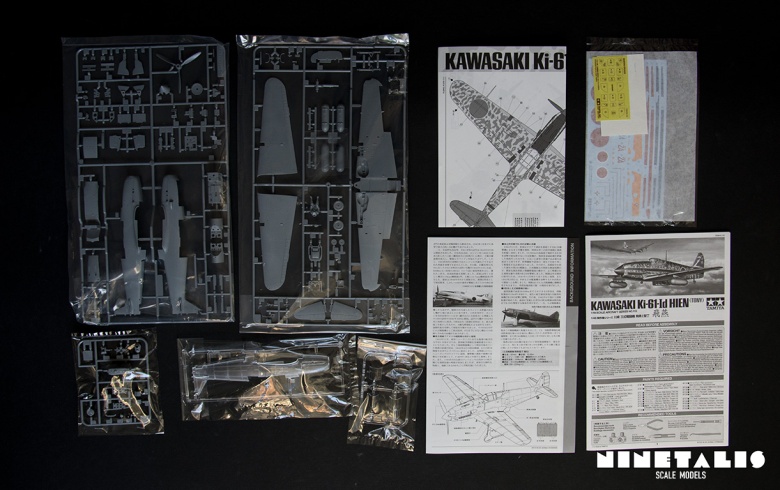 Contents
It’s fair to say that when Tamiya announced their new latest kit to be a 1/48 Ki-61, it took the modelling world by surprise. Hasegawa having a decent kit of a Ki-61 for years now probably contributed to that fact. As such some even questioned the point and general interest for this release. Did Tamiya waste their effort? Or will Hasegawa finally have to give his 1/48 Ki-61 throne? Let’s find out.

The kit is provided in the usual Tamiya top down box, with a beautiful cover-art of an Ki-61 from 244th Air Group with a B-29 with it’s number 2 engine on fire. Tamiya seems to lay the emphasis with this kit on the fact that towards the end of the war many Ki-61’s were allocated for home island defence missions fighting off B-29 bombers, as this is repeated several times on both the box and instructions sheet. Upon opening the box we are greeted by five sprues, three of which are in styrene and the other two in clear plastic, providing X styrene and X clear parts. It obviously won’t surprise anyone that the detail is extremely fine as we are used to see with Tamiya kits of the day. 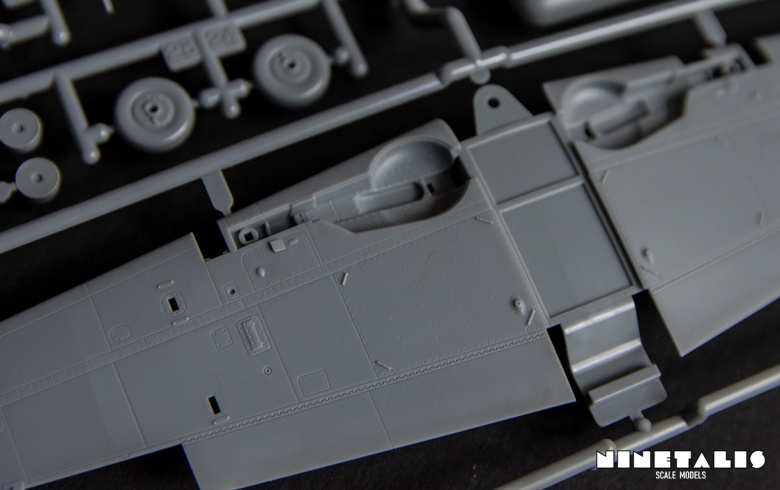 Sprue A
Most notably on the A sprue are the upper and lower wing halves and horizontal stabilisers. There are of course other parts as well like the rudder, tail wheel, main landing gear and wheels, drop tanks and their hard points, the cockpit parts and even a sitting pilot figurine. Detail is all round amazing. From the panel lines and rivet detail on the wing halves to the folds in the clothes of the pilot figurine.

The only thing I’d note here is that the wing gun ports are not molded on the wing halves themselves, but rather as a separate part that you will have to glue in place once you’ve put together the wing halves. I feel like the manufacturer has done this is for two reasons. The first being to pave the way for another Ki-61 variant that houses different guns in the wings. The second is that gun ports occasionally leave difficult seams to deal with.

Normally I have my doubts about this approach as the parts never seem to align properly and create bigger problems than the one they try to avoid. However, we are talking about a Tamiya kit and when it comes to the fitting of parts I do give them the benefit of doubt. I will update this once I get to build the kit.

B sprue
The second sprue holds the fuselage halves. Detail can be found on both sides of the frame and is again mind blowing and up to the highest standards of today. Other parts we  can find are the propellor and propellor cone, the radiator and cover, main landing gear doors engine cover and the engine exhaust amongst other small bits. Overal there is nothing out of the ordinary to note, except for the exhausts.

This part has been designed in such a way that the exhaust is molded together with part of the fuselage so to say. As such you can’t just paint it and put it in place when applying the final touches to your model. One might think that this is done because this particular part of the fuselage is coloured differently. But once we pay some closer attention it is clear that this panel is larger than this particular part provided. A bit of a silly mistake but one that might make the painting a bit more difficult depending on how you usually tackle this. 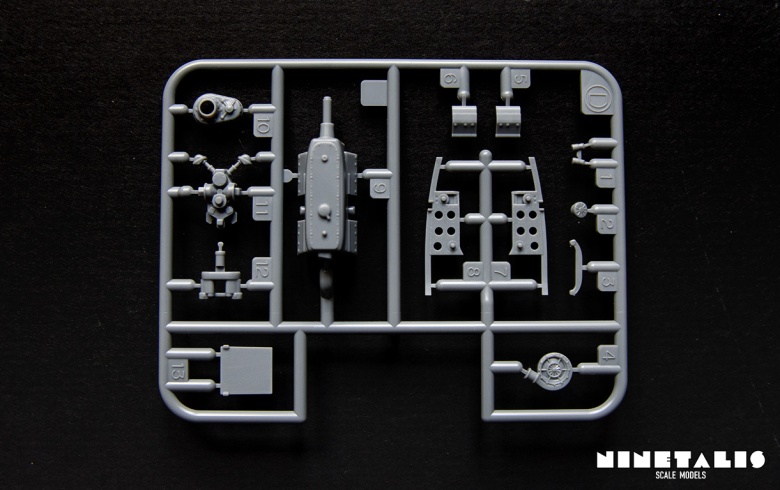 D sprue
The final styrene sprue is also the smallest. Depending on your point of view it might also be the most important one. This because since for the first time Tamiya has included an inline engine with a 1/48 kit. Quite impressively it is divided into ten parts and is it extremely well detailed. We even get some parts to add detail to the engine bay wall. A very worthwhile effort which I hope we will see more often in quarter scale from Tamiya! 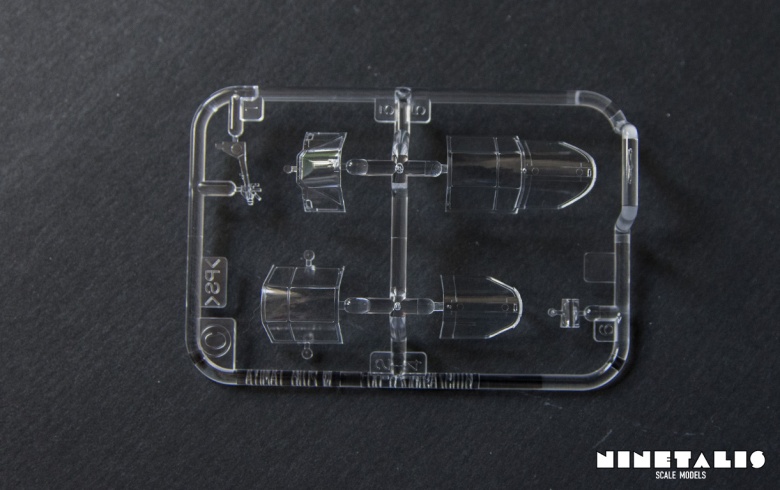 Clear sprues
Two clear frames are provided with this kit, which are both packaged separately. The first frame holds several canopy parts and a gun sight. Both a closed canopy and a canopy in separate parts is provided. As such you can display the cockpit open or closed as to personal preference.

The second frame is a little bit more special, providing a clear left fuselage half, in case the builder wishes to present the interior of his model in a more unique way. As this is an optional part and styrene left fuselage half is provided on the B sprue, you can build the kit perfectly without using it. 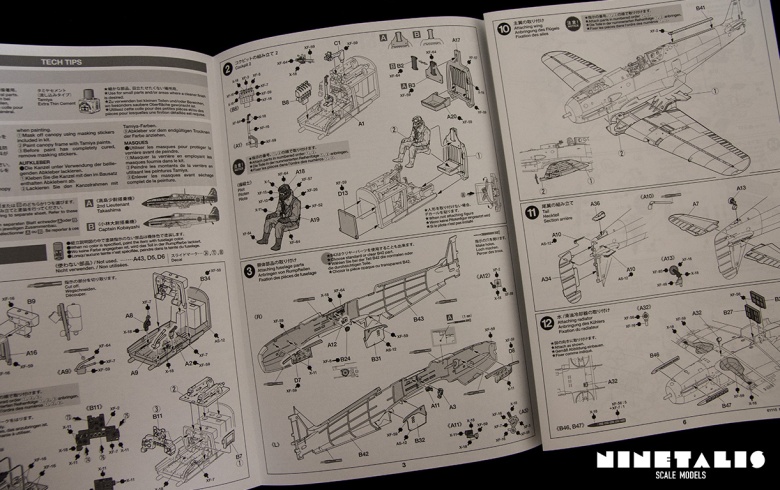 Instructions
The instructions are what we are used from Tamiya. Presented in a long leaflet roughly the size of an A4 sheet of paper, we get the usual auto-cad/illustrator-ish illustrations. If you never had trouble understanding these before I have little doubt that this will be little different.

Markings
Provided with our kit are only two sets of markings. Both of these are from the 244th air group based at Chofu Airbase during 1945. These aircraft was responsible for defending the Home Islands of Japan and intercepting B-29 bomber raids.

The first aircraft is that of 2nd Lieutenant Shunzo Takashima flown during May 1945 which is depicted on the box cover. The aircraft sports an overal silver finish mottle camouflage in IJA Green on the upper surfaces and a blue band running around the empennage and on each side of the fuselage. The tail is overal red with the 244th Air Group marking in white. The image above gives a general idea what the aircraft looked like, though the aircraft in the photograph is of a different type (Ki-61 Hei model).

The second aircraft is that of Captain Teruhiko Kobayashi flown during February 1945. Also painted in overal silver this airframe also sports a band running around the empennage and each fuselage side. It is however in red and not blue like the previous airframe. The tail is also painted overal red with the 244th Air Group marking in white.

Though two marking options is the standard with most kit, Tamiya from time to time gives us a few more options to choose from, and somewhere I’m a bit disappointed that we didn’t get any more here. If you find this to be a deal breaker you are not to worry, as the Ki-61 is a very popular subject when it comes to aftermarket decal sheets.

Decals and mask
Last but not least are the two decals and canopy mask. The first and larger decal sheet mainly provides the hinumaru’s, the yellow band found on the wing leading edges, the fuselage and empennage bands, walkway lines, the kill markings of the first airframe and the 244th Air Group Marking markings. Notable here is that a second set of ‘stars’ which are painted around the gun ports are included separately. Thanks to this you can paint the leading edges yourself if you prefer to do so over using the provided decals.

The second sheet of decals provide the smaller decals. These are mostly the stencils, the instruments, the kill markings of the second airframe and a set of seat belts.

Both the decal sheets seem to be of good quality, but don’t seem any different than what we usually get. I know that there are certain people in the hobby who aren’t big fans of the decals that Tamiya provide. If so I would advise that you’d maybe invest in some aftermarket decals.

Also included is a piece of masking tape. On this sheet the outlines of the canopy framing is printed so you can cut the masks into shape yourself. 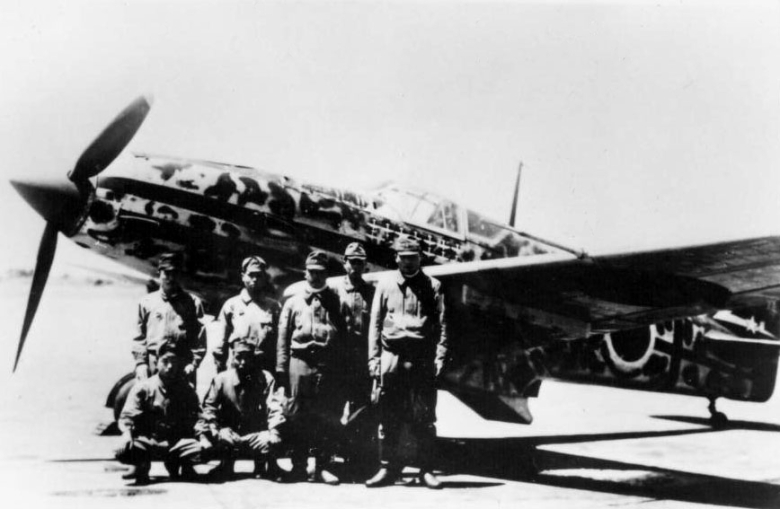 Conclusion
I have held my stashed Hasegawa kit in my hands several times this last year. I’ve always held it with an intention to build it, but every time I did some test fitting I’ve always put the aircraft back into my heap of unbuild kits to build another day. I do feel that with this kit this will not be the case. It is simple in it’s breakdown of parts, the detail is amazing and knowing Tamiya the fit will be out of this world. While the Hasegawa kit is not bad at all, I would say that the new Tamiya kit is the better of the two.

Is the kit absolutely perfect? No, but it is a very close call. Probably the biggest drawback are the exhausts molded together with part of the fuselage, which in all honestly is almost something of a moo point and all depends on how you usually paint engine exhausts. I just think that there are so many better ways that this could have been done.

If you are looking to add a Ki-61 kit to your stash, then I wholeheartedly say that I’m sure you won’t regret taking one of these home. No matter wether you have a bunch of experience or just starting with the hobby, it will most likely fit your needs.