The history
The Scud is a series of ballistic missiles who were developed by the Soviet Union during the Cold War. These were also exported to other countries who were part of the soviet union, in particular third world countries. The name ‘Scud’ was given by the NATO as a reporting name and was later kept as a way to refer to any of these missiles and the derivative variants who were developed in other countries based on the Soviet design.
The Russian names for these missiles are the R-11, R-17 and R-300 Elbrus, and most of these are still in service today. The accuracy of these missiles range from 3000m (scud A) to 50m (Scud D) with an operational range from 180 km (Scud A) to 550 km (Scud C).

This kit contains the Scud B variant (or R-17 by Soviets standards) of the missile series. It was first launched during tests in 1961 and was renamed R-300 in the 70’s. It had an estimated production run of 7000 units build. It was seen as an improved version of the R-11 which would be able to hold a nuclear, chemical, conventional or fragmentation weapon. It was first carried around on a Tracked Transporter Erector Launcher (TEL) which proved unsuccessful. It was later replaced by a specifically designed wheeled vehicle called the MAZ-7310 (or also the Maz-543), which is the vehicle provided with this kit.
This very machine was first presented on November 7, 1965 during the Moscow Red Square military parade and could carry a load of up to 19,6 tons. 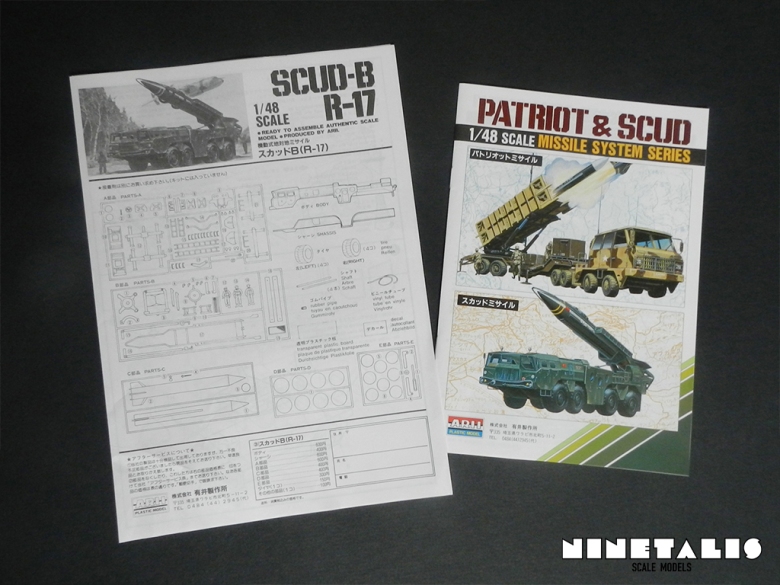 The sprues
So as said in the previous part of our article, this kit consists of a Scud-B missile and a MAZ-7310 carrier. These are spread out over 5 sprues (4 for the Maz and 1 for the missile) and the upper and lower part of the MAZ, 8 vinyl wheels, a vinyl tube, 4 metal shafts, a small transparent plastic plate and a decal sheet. Yes that is a mouthful. On the sprues we can find exactly 99 parts which look pretty decent, but not exactly too detailed. A few parts have small engraved lines but most are very basic looking. Nonetheless it seems that this will be a very neat model once build up and gives you the space to add some details yourself if you are up to that challenge. 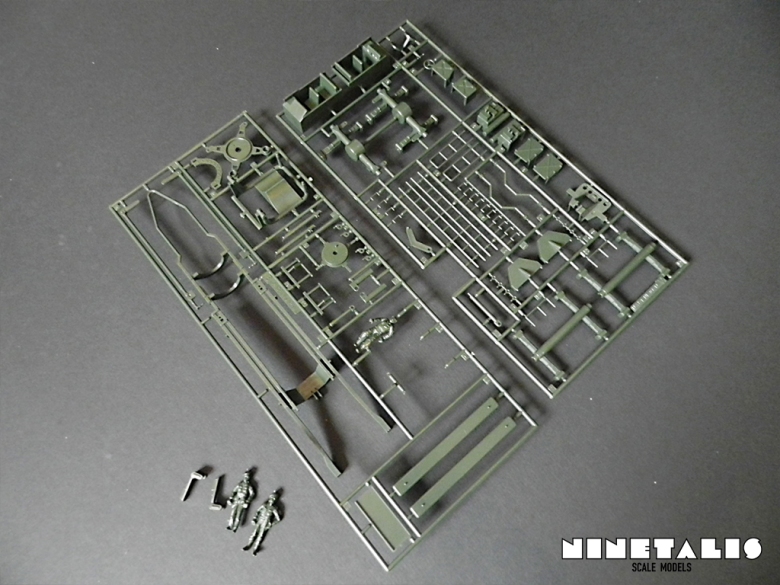 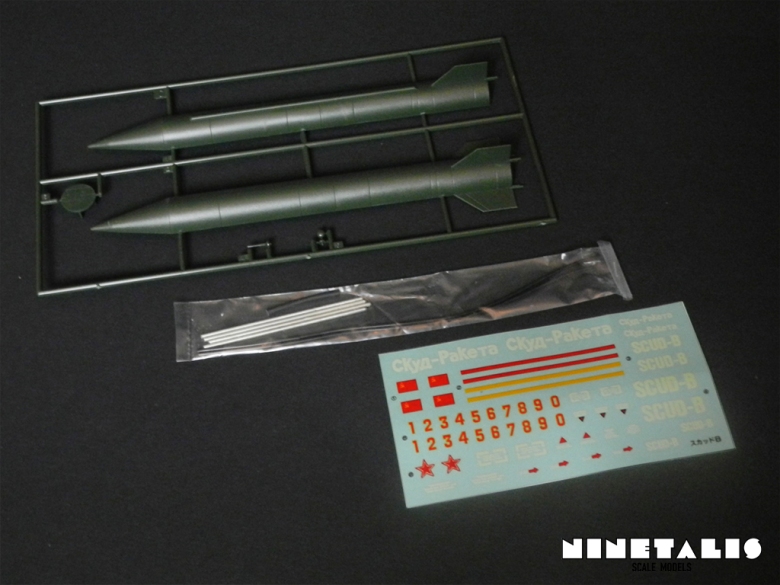 Judging from pictures found around the net, the MAZ seems to look fairly accurate depending on what version you want to build. If you want a scud-B launcher version, then this looks fairly good like the real deal. Especially considering that this kit is still from around the 1980’s when the Soviet Union was still very secretive towards the West.

Now, upon taking a first look at the contents, it seems like a very nice kit at first sight, which it is. But when examining the contents a bit closer, you can see a few flaws with the design process the manufacturer followed. An example, which is the biggest annoyance is that there is some kind of a rope form molded on the front bumper, it doesn’t really lean on anything and eyes quite unrealistic. It could be fixed by adding some scratch build hooks with metal wire, or you can just remove the entirety of the rope from the bumper itself if you have the skill not to ruin the bumper in the meantime.

Secondly, a very beautiful detail is that there is actually a roster molded on the top of the space where the missile leans on. It actually is very impressive to see such detail on such an old kit. However, there are sink marks right slack in the middle of this all and it will take an experienced hand to remove this without damaging the roster to much. Consequently it also makes the rest of the pieces extremely basic looking, especially with the very deep panel lines, which are luckily recessed though. Also a part of the drivers cabin should be a bit bulged, which is not the case with this mold.

Also included with the kit are 3 figures of quite good quality, especially given their age. However upon examining the box it came clear some of them did come lose from the frame, including some other parts. One of the figures will need to be puttied up, since their is a sink hole in it’s crotch… awch.. 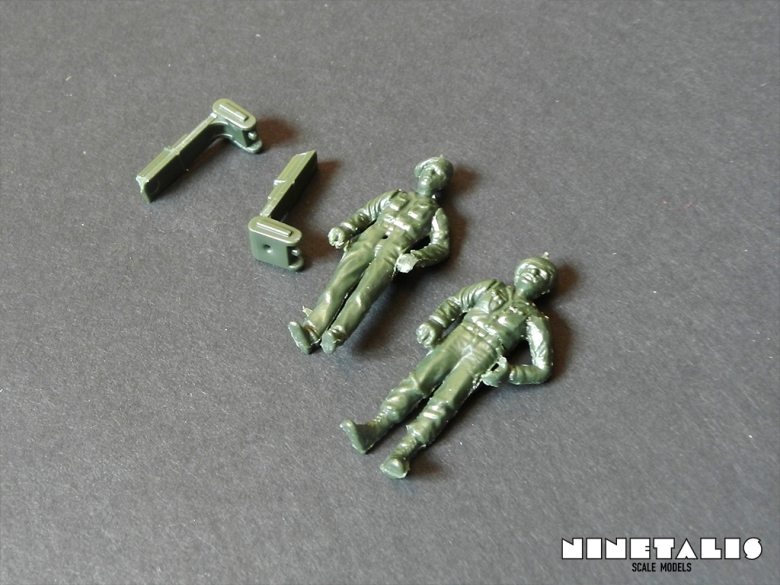 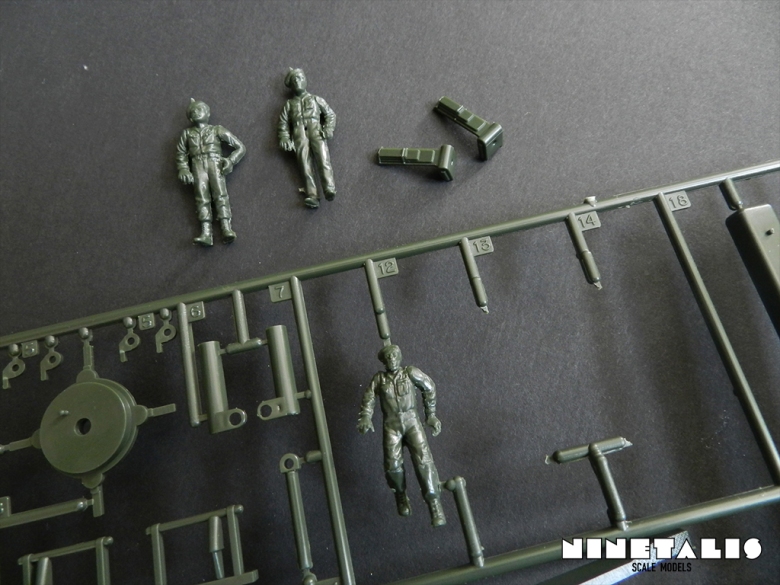 The other parts are quite basic looking, some have no panel lines at all. It makes one wonder if this is because of a lack of work into the kit or because these machines just nearly don’t have any detail. Personally, judging by the reference material I’ve found, It seems to be mostly because the machine is quite spartan looking in real life and has that ‘basic’ Soviet idea. It’s brutally simple, but it will get any job done it was designed for. They could however have pushed it a bit further, but you won’t notice it that much. There are also a few molding lines on the parts which are quite apparent sometimes, but nothing which can’t be helped with a bit of cleaning with a small scalpel. The biggest fallback is that there are no parts at all to create an interior of the drivers cabin. Not even a seat or a steering wheel.

The wheels
Inside the kit you can find 8 molded rims, which have 8 accompanying rubber tires. The rims come quite close to the real deal, as can be seen on the pictures below. The tires on the other hand do not and don’t seem to resemble the real tires at all. Also the rubber itself feel more like some sort of gell and are not matte like the tires that we usually find with most kits. They are however quite bendable, which does add a touch of realism. It’s a bit sad they didn’t get the tread pattern right or at least something more realistic than this, because it would not have been hard. I’m not aware if there any after market replacements in 1/48 scale but I doubt that any will ever be released. 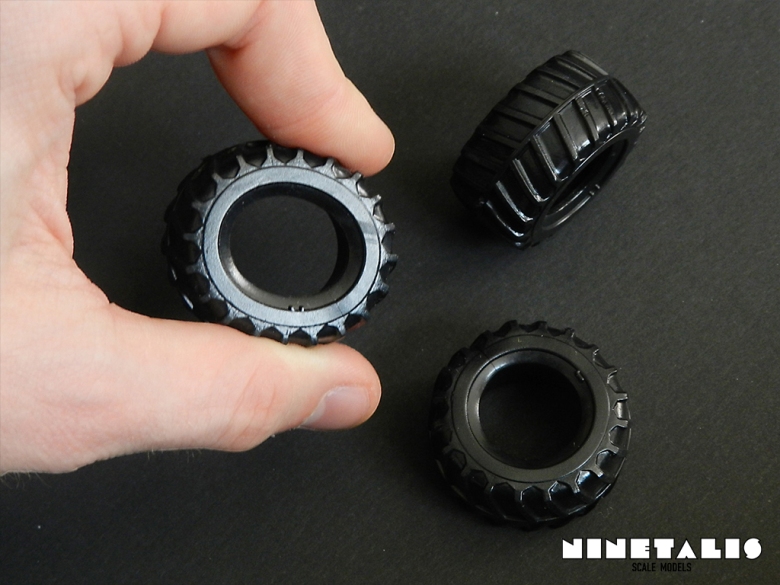 Decals and clear part
There isn’t a lot that can be said about the clear parts. Rather because it is just a simple flat sheet of clear plastic that’s 10 by 3 cm. Luckily the instructions tell you how you need to cut the sheet into the right size to use it with your model.

The decals are however not really convincing. One look at it already tells you a lot. The clear border of the decals are really big and will definitely need to be cleaned up. The white quite yellowish and the underlying paint will probably be visible, although one can’t be sure of that until it has been tested. Another thing is the stencils. They are just white bars, not actual downsized text. This is definitely not because the text would be to small to print. Pretty much on the contrary, the text would be so big that it would stand out on the finished model that these are just bars and not actual text. A question I also have is why there are red numbers on the sheet, as the only missile launchers I have seen so far sport white numbers or even more often have nothing at all. None ever wear these red numbers as far that I can tell. In my opinion this could really use a small update and so a raid on your spare box will definitely be required.

Instructions
The instructions are divided into seventeen separate illustrations, printed on a long sheet of paper, which folds into four separate pages. These illustrations are quite simple and focusses on one individual step at a time. One should have no problems following these clear instructions. However the painting scheme consists of a single side view and is just as simple as the instructions, so it does not really give you a lot to go on. The colors that are supposed to be used are only written in Japanese, but luckily they do have the Gunze Sangyo color codes included and are decipherable with through info. 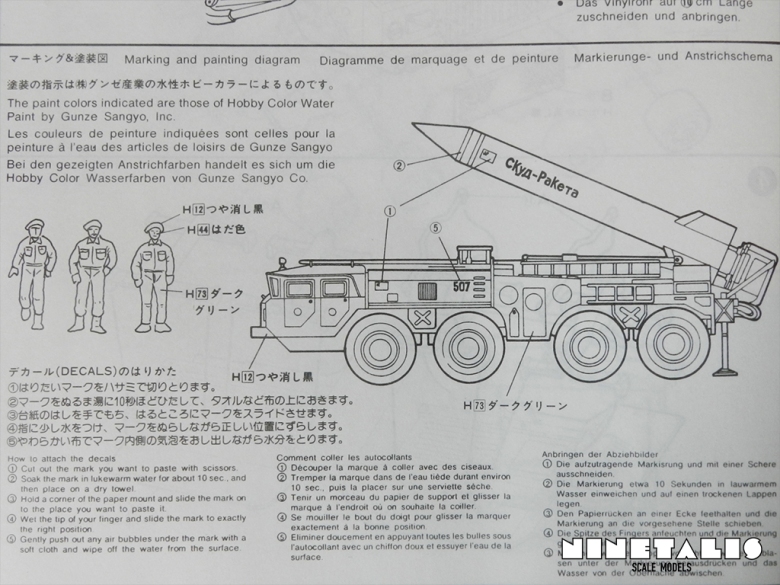 A nice surprise with the kit is the addition of a leaflet which offers info on the various missiles that can be deployed by the MAZ-7310. Info includes the size, range, power and accuracy of the various missiles that can be found with other ARII boxings from this kit line.
Somewhere in the process however, there must have been a small mix-up between the ranges and weight of the various missiles, as the leaflet states a range of 270km and a weight of 6,370kg for our Scud-B. This is the case with R-11 (Scud-A), but the leaflet clearly states to be providing info about the R-17 missile, which most sources claim to have a range of 300km and a weight of 5,800kg. Yet it must be said that most of the other info seems to be largely correct. Also included is info on the american patriot missile systems, which can also be found in the ARII kit line-up in 1/48 scale. 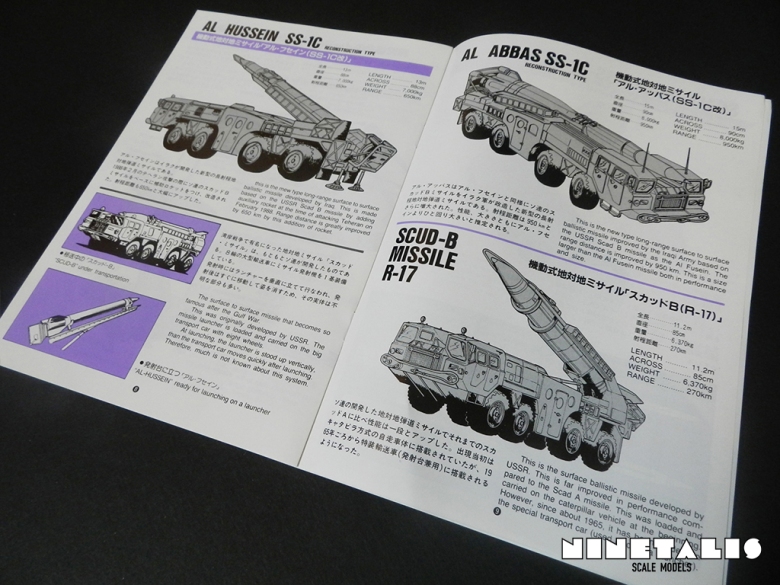 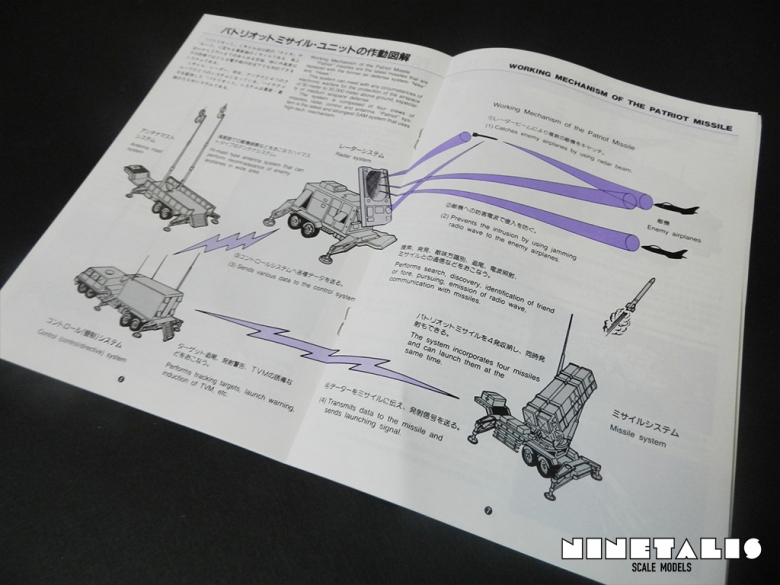 Judgement
I won’t wrap anything around it, this is probably not your most accurate MAZ Scud-b launcher out there, but also keep in mind that this kit dates from the Cold War period and was probably the first option ever to build this machine. If you want the better ones out there, you have to look at the 1/35 scale line with the Dragon kit from the nineties, the newly released Trumpeter kit from 2014 or the coming 2015 kit from Meng Model.

These will cost you a whole lot more though. As I’ve paid only 15 euros for my Arii kit at retail, and the highest prices I’ve seen out there for these are about 32 euros, which is still only about half (or even less) of what these other kits go by. It has nice details like additional figurines (of good quality) and does sport some recessed panel lanes despite it’s age, which are often not found on kits from the era this kit descends from.

Thereby, this is the only choice you have in 1/48 and makes an excellent kit for any ‘war gamer’ out there who likes to make their own 28mm pawns. Also given somebody has some skill in scratch building, this could be used as base to make a quite accurate rendition of a Scud-B Launcher at a very reasonable price.

This kit is definitely recommended to anyone who would like to make something different in quarter scale, but has at least build one or two kits before.