Welcome back all! It has been a while since the last Sprue cutter union post, as I didn’t have time to write the topic for March’s question. But today I’m back to answer the April sprue cutter’s question.

What do I work on when I need a relaxing build?

Well, that’s pretty easy to answer actually. Any 1/35 scale kit I have in my stash. Why that specific scale you might ask? Well because that’s the sole reason why I buy them. Any person who knows me and my hobby a little bit also knows that I’m a frequent convention visitors, where I go on an all out bargain hunt.

Aside from searching all kinds of stuff in 1/48, I also try to find really cheap 1/35 jeeps, trucks and armoured personnel carriers (no armour) which are then build as a off-road racing machines. This started when a person send me a free kit as a thank you for being part of a forum (which is no longer around). That kit was a Tamiya 1/35 Land Rover Ambulance and was build as a racing truck. Inspiration for these builds are fuelled by a mix of two things. My eternal love for the Dakar rally where some of the most talented drivers in the world drive a series of races in a very hostile environment. Second are the Motorstorm games, where you bump and crash your way to victory with small dirt-bikes to monster trucks. 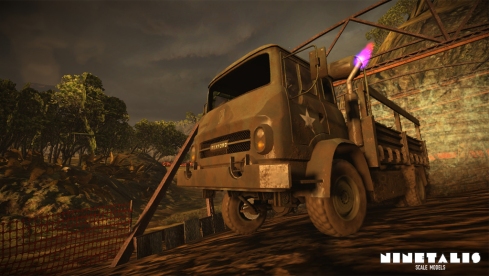 Now Why is this so relaxing? Because I don’t have to care the slightest bit about accuracy. I can completely do whatever I want without anyone telling me I’m doing something wrong. Second of all is that I don’t have to worry at all about ruining my model. The clear part is fogged and unusable? Put a mesh in its place! Missing a wheel in my Chevy Gun Tractor kit? Just slam a spare set of Hummvee tires underneath it and you’re good to go! The only limit there is your own fantasy!

Another reason why I like these builds is that since I can’t really ruin the build, I’m more eager to try out new things. During the Land Rover build, I painted everything on it, including the Alpinestars logo which was cut out of masking tape on a small cutting printer and then painted on the model. The motorcycle I made was the first diorama I made that featured a bunch of material I had in my spares box, and was the first time I really weathered stuff using pigments. I was ready to try it out on my aircraft models without having to worry that I was going to ruin it, as I had done it before here. But in the meantime I had gained a new model to display which was a blast to build.

Check out the Sprue Cutters Union to read other takes on this subject!