Skip to content
Posted on December 13, 2016January 13, 2017 by Ninetalis Posted in My humble opinion 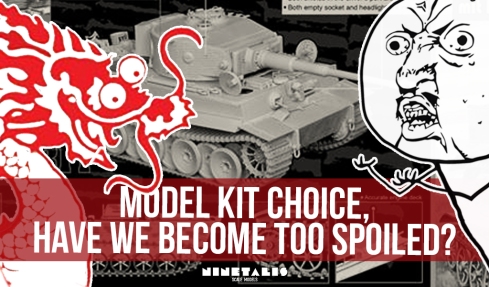 Recently I was browsing my Facebook feed when I noticed I had scrolled by the same picture a few times. It was in fact a post about the newly released Dragon Tiger I kit combined with a Borgward IV Ausf.A shared in a group.

This post however was combined with a headline in bold letters…

‘SERIOUSLY DRAGON?! ANOTHER TIGER I AS WE DON’T HAVE ENOUGH OF THOSE YET, PROBABLY WITH CRAPPY DS TRACKS AND A 20YEAR OLD BORGWARTH KIT! I WANT THE STAR WARS KITS YOU ANNOUNCED LAST YEAR!’

Now I have seen some anger because of rereleases or ‘pointless new kits’ before, but this seemed to be on a whole other level. Needless to say it made me curious. Did I miss something? Did they post mean comments about Russian tanks? Did they cancel their Star Wars kits? Has Dragon blown up the last working Tiger I at Bovington to create this very kit? (spoiler alert, they didn’t)

I scrolled back up to those two previous posts and these had the same kind of ‘angry’ headlines, all with flourishing comment sections bashing this ‘new release’. Even the original post from Dragon seems to be quite full of hate.

Here’s a little feeler, just to show you what I’m talking about..

Now I don’t mind your hate for DS tracks or that Tamiya does a better job, but damn…

It made me think about that HobbyBoss 1/48 Su-34 Fullback kit and how that was recently received right before it was about to hit production. That went pretty much the same way. I agree that HB could have done a better job but some people took it way to seriously, as if the company just killed their pet dog… I do wish to add that I didn’t agree with HB’s reaction on the feedback as well.

Even when I did a little research of my own, which was informative yet far from anything conclusive, it proved to gather quite some interest without much effort. That was before the kit’s price became public and shit literally hit the fan….

Now I can understand that a 1/35 Tiger I is nothing new. Combined with ‘Dragon pricing’ for a 10 year old kit, well it’s not something many are waiting for. However the hate it got seemed a little…extreme… 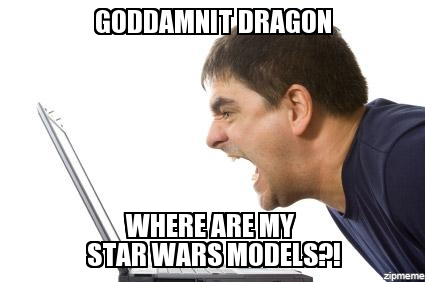 This is something I really don’t get… Why even waste your mood with anger over a new kit? Nobody is FORCING you buy any kit so why bother? The point that Dragon releases another Tiger I must be because it just sells like crazy. And even if you don’t want one yourself, there will be a new kit announced in less than a month from someone else that you will want! So what’s even the point in getting upset about it?

Thankfully I wasn’t the only one with this insane opinion. So when someone asked why everyone was so angry, the main response was something like ‘but-people-will-buy-this-and-not-be-aware-what-they-into’ point.

Dude… the internet is full of inbox reviews, WIP and photographic galleries of any recent kit, not to mention Scalemates. You pretty much know what you’re getting into with just a little bit of knowledge and research. If the person then settles for that particular Dragon kit, it’s on him…

The sad part of this whole thing is that while I don’t build 1/35 tanks, even I am aware that Dragon has this reputation of ‘not being original’ and releasing yet ‘another-German-Nazi-thing-that-they-did-10-times-before-with-just-a-little-change’. It seems like they get more hate for applying little changes with every kit, compared to a different company that would just rebox something for the twelfth time.

And when you go to Dragon’s Facebook feed and you just scroll down a bit, you can see they have announced several new kits that have not been done before like a T95 Super Heavy Tank, a Vollkettenaufklaerer 38 w/7.5cm and an IDF M3 Halftrack Nord SS-11 Anti-Tank Missile Carrier amongst other things.

So yet despite Dragon filling certain gaps with those kits, nobody really seems to talk about them. I guess people just like to focus on something as long as it fits their agenda.

But my actual point is not to slander individual people or state anyone is wrong or should grow up or whatever, what I really want to get at is something I have been experiencing the last two years.

Despite that we all have wishlists of what we would like to see, it is hard to keep track of everything that is actually BEING released… Even the obscure 1/32 car kit range seems to be making a comeback. Then I’m not even thinking about all the new companies sprouting around the world, let alone all the aftermarket we get for almost any new kit that sees the light of day. The list literally is endless!

Personally I must say that I experience some type of relief when I find out that a new catalogue from a manufacturer has only one new thing in sight that I want. And that’s because of one simple reason. The releases from the last 5 years are starting to be to much for me to handle, let alone finding the time to build them. And I’m pretty sure I’m not the only one having this problem…

I’m not saying that you can’t criticise anything anymore, I just don’t know why you would lose energy over it given everything we are getting… To be honest, why are we actually complaining about it?

2 thoughts on “Model kit choice, have we become too spoiled?”